What are the best spoof movies of all time?

From scary sendups to tongue-in-cheek action films, we’ve all seen spoof films – and we know they’re a guaranteed good time, whether you’re watching on the big screen or at home.

But what exactly are spoof movies? And what are the best spoof movies of all time? Read on to find out everything you ever wanted to know about spoofs.

What is a spoof movie?

First things first: whether you’re looking for something easy to watch on a Saturday night, or you’re interested in studying spoof films as you have ambitions of making your own, you really should know what is actually meant by spoof.

A spoof movie is sometimes also called a parody. It’s a genre of film that mocks either another genre, stitching together some of the most common tropes in the genre, or a pastiche of specific film.

Spoofs aren’t necessarily the films that win the most awards, but they’re always popular in the box office and on streaming channels – and despite their sometimes silly premise, they utilise a variety of filmmaking techniques to create a piece of art that’s both smart and popular.

They’re not a new invention, either – spoof films have been around for decades. One of the first spoof movies is a 1905 film called The Little Train Robbery, a parody of (and sequel to) The Great Train Robbery. The 1905 film had an all-child cast, with a plot that featured kids stealing candy and dolls from a mini railroad car.

Spoof films really took off in the 1970s, largely thanks to Mel Brooks’ Young Frankenstein, a parody of the horror genre, and a box-office hit. The genre was still going strong in the 1990s and 2000s with comedy mega-hits like the slasher spoof Scary Movie, which grossed $278 million worldwide.

Spoofs and parodies are still going strong today. But which ones should you pay attention to? Let’s take a look at the best spoof movies of all time so you can add them to your watch list.

Whatever genre you’re into, there’s a spoof movie for you. From spoof horror films to rom-com parodies, here’s our ultimate guide to the best spoof comedy movies out there.

There are three films in the Austin Powers series: International Man of Mystery (1997), The Spy Who Shagged Me (1999) and Goldmember (2002). The films, centred around 1960s British spy Austin Powers (played by Mike Myers) and his arch nemesis Dr Evil, are a pastiche of spy films like the James Bond films.

They parody the unbelievable plots and sexual innuendo typical of these films, and all three films were huge commercial successes, cumulatively grossing over $676 million (£590 million) worldwide. The films spawned catchphrases like “Oh, behave!” and even had an impact on James Bond movies, with Daniel Craig’s Bond taking a more serious turn with fewer puns and more grit to distance itself from the Austin Powers parody.

Scary Movie, released in 2000, is a comedy slasher film with a plot that closely resembles both Scream and I Know What You Did Last Summer. The opening scene is similar to that of Scream, in that a teenager gets a threatening phone call from somebody dressed as Ghostface, the killer from the Scream movie franchise.

The plot then follows a group of teens who accidentally hit and kill a man, and dump his body, before later being hunted down by the Ghostface killer. While most closely resembling these two films, it also takes plot points from other films and TV shows in the genre like The Sixth Sense, The Shining, The Blair Witch Project, and Buffy the Vampire Slayer.

A must-watch for Eurovision lovers, this film stars Will Ferrell and Rachel McAdams as Lars Erickssong and Sigrit Ericksdottir, a duo known as Fire Saga, and Iceland’s best shot at success in the singing competition.

A homage to the kitsch singing competition, the film is as over-the-top as you might expect, and it’s only really likely to appeal to fans of the show – but for those who are fans, this is a sure-fire hit with a stunning soundtrack of songs including the Academy Award nominated Husavik. 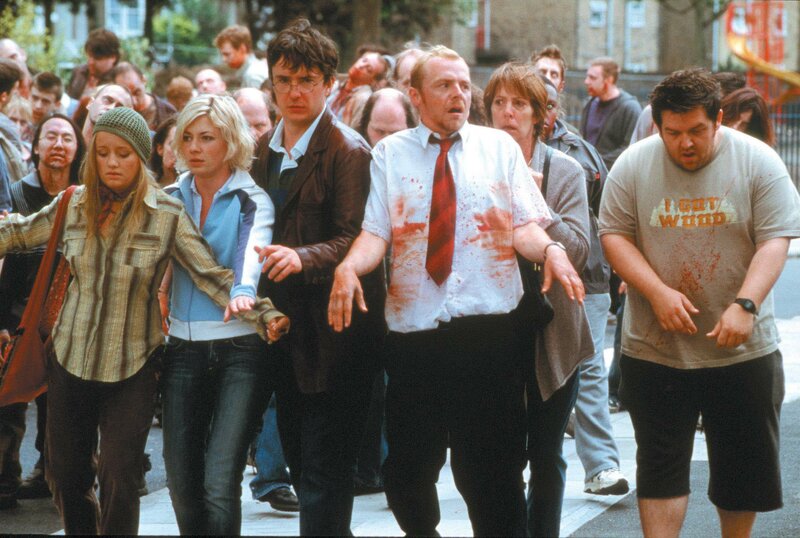 Shaun of the Dead

Edgar Wright’s Shaun of the Dead is a parody of George A. Romero’s Dawn of the Dead and other films. The plot centres around Shaun (played by Simon Pegg) who finds himself in the midst of a zombie apocalypse with his friend Ed (Nick Frost).

The film includes lots of references to Romero’s films, as well as to other zombie films such as 28 Days Later – but more than just being a riff on the zombie genre, it’s also plays with what you’d typically expect from a zombie film. As Edgar Wright says in his BBC Maestro course on Filmmaking: “What appeals to me the most about genre is that it allows filmmakers to have fun with the story conventions they’re using. Shaun of the Dead gave me the freedom to take a zombie film and transform it into a romantic comedy. It gave me the opportunity to make a movie unique to my own vision as well as one that felt distinctive to the genre as a whole. So, while I was obviously paying homage to the conventions you’d typically see in zombie films, I also had the ability to tell a story that I felt had never been told before.”

Blazing Saddles is a whip-smart lampoon of the Western genre, packed full of laugh-out-loud moments while commentating seriously on the genre’s problematic aspects – most prominently, highlighting the endemic racism in traditional Westerns.

The film had a mixed reaction upon its release in 1974, but it’s gone on to become a cult classic, and one of Mel Brooks’ best-loved films.

This Is Spinal Tap

This Is Spinal Tap is one of the earliest mockumentaries. Rather than being a parody of one particular film, it riffs on hard rock bands in general and films like Led Zeppelin’s The Song Remains The Same. Released in 1984, it follows the fictional British heavy metal band Spinal Tap on an American tour. It might not sound like much, but it’s often thought of as one of the funniest films ever, and has become a classic since its release, gaining both cultural and commercial success.

Released in 1980, this film is a parody of airport disaster films. It takes a lot of plot elements from the Airport series of films, particularly Airport 1975, but the film is almost entirely based on the 1957 film Zero Hour!. It even has the same main characters and plot as the earlier film.

Often judged as one of the funniest films ever made, Airplane! makes use of slapstick comedy, surreal humour, puns and gags. It’s full of memorable lines, too, including the oft quoted line “Surely you can’t be serious? I am serious. And don’t call me Shirley.”

The film pushed boundaries, and although the raunchier and more political aspects of the plot feel slightly dated, the movie as a whole stands up and feels as relevant as ever for viewers today.

Monty Python and the Holy Grail

Often ranked highly in lists of both the best-ever comedy films and best films in general, Monty Python and the Holy Grail had mixed reviews upon its release. Its popularity grew over time, and the film has had a big impact on both comedy fans and comedians. Silly, funny and charming, it’s proof that spoof films can have a lasting legacy. 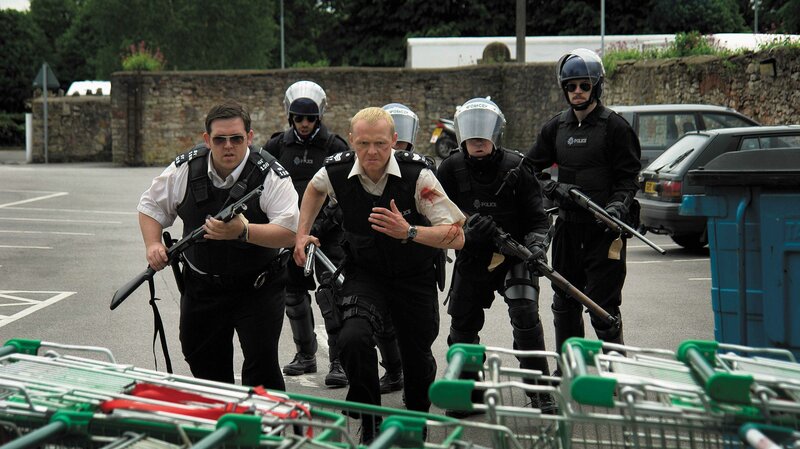 Hot Fuzz is both a parody of and a homage to action films. It focuses on two police officers, played by Simon Pegg and Nick Frost, who are investigating a strange series of deaths in a small village in the West Country, England.

The film reportedly takes inspiration from over 100 action films – but it also drew inspiration from real-life police officers. Edgar Wright says of the process of making Hot Fuzz:
“With Hot Fuzz we felt it wouldn’t be wrong to watch every cop movie ever made and, while Simon watched a lot, I may have watched close to a hundred cop movies, to the point where all of the clichés of cop movies start to come to you by osmosis. I couldn’t pinpoint any one thing in any one film because so many films are similar to each other: I wanted to figure out the different clichés within cop movies and find ways to subvert them. The other big aspect of Hot Fuzz was that we did first hand research with the police and that was worth its weight in gold. We interviewed police in London, went on a mini tour of rural police stations in Somerset, Gloucestershire and Wiltshire, and interviewed many police officers in the areas where the film was going to take place.”

A modern mockumentary, this film from Andy Samberg is a parody of reality shows and modern music culture. Starring Samberg as global music megastar Conner4Real, the film follows his rise and demise, all accompanied by a soundtrack of parody songs from Samberg’s comedy band The Lonely Island.
The film didn’t do particularly well commercially, but it was well-received by critics, and has built up a cult following since its release in 2016.

Learn how to make a spoof movie

Feeling inspired and want to try making a spoof of your own? Whether you want to create a horror-inspired film, an action-packed cop movie, or even a fusion of different genres, you can learn more from one of the masters of spoof himself, Edgar Wright, with his course on filmmaking.