What is an independent film?

If you’re a budding filmmaker, it’s likely that you’ll start out as an indie filmmaker – and you may stay that way throughout your career. But what is an independent film? And what do you need to keep in mind when embarking upon this path? Here’s everything you need to know about the world of independent filmmaking.

What are indie films?

First things first: what do we mean when we talk about independent (or indie) films? Independent films don’t refer to just one particular genre. Rather, a film is classed as independent if it is made outside of the big studios. They’re made outside of the film studio system, which means that they don’t usually have any involvement or endorsement from the major movie studios or television networks, and they’re usually made by people who work outside of these systems, too.

They are, instead, usually made and distributed by individuals or independent entertainment companies. Big studios often come with big budgets – and conversely, indie films are often made on a smaller budget than mainstream productions. That means that indie filmmakers can retain more control over their films than they would if they were working within the remits of the Hollywood film industry, where film studios control all aspects of filmmaking, from production to distribution.

There’s a great range of different indie filmmakers, which means that one-person productions and some of the biggest movies of recent times can both fall under the category of ‘independent film’, simply because they were made outside of the remits of the big studio structures.

Indie filmmakers, then, aren’t necessarily only up-and-coming names that you’ve never heard of. No, it’s likely that some of your favourite directors are also independent film producers. Did you know that David Lynch, director of Mulholland Drive, is an indie filmmaker? That The Terminator wasn’t made by a big-budget studio but is, in fact, an indie film? Or that Edgar Wright, the director behind Shaun of the Dead, Hot Fuzz and Baby Driver isn’t attached to a film studio, leaving him free to blend genres and make the films that he wants to make? Or how about that iconic 80s movie, Dirty Dancing – did you know that it too is an independent film?

So, both new and established filmmakers can make independent films – all it means is that they’re doing things on their own, in their own way, rather than being attached to a particular film studio. 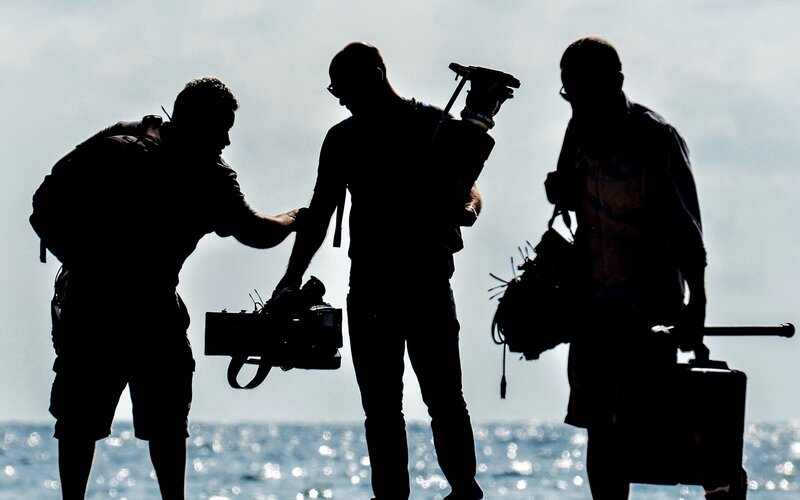 What are the benefits of making an independent film?

If so many big-name filmmakers have chosen to go down the independent route, there must be a good reason for it.

One of the major draws of independent filmmaking is the freedom it gives directors. They’re able to create a film that follows their own vision, without any interference from studios who may want to take the film in a certain direction to appeal to mainstream audiences. Commercial films are, unsurprisingly, made with money in mind – but independent films may not necessarily have box office success as their driving force (although most indie filmmakers wouldn’t argue that it’s nice to make money from their movies!). That means that filmmakers may be more guided by their creative vision when making an independent film – which can result in some of the funniest, most beautiful, or most thrilling films out there, as in the indie film examples noted above.

Another big benefit of independent filmmaking is that it’s more accessible to everyone. It can be hard to get noticed by the big studios when you’re just starting out or are in the initial stages of your career. But there’s no need to wait to hit the big-time – all you need to get started as an indie filmmaker is an idea, and the means to turn it in to a film. As Edgar Wright says in his BBC Maestro course on Filmmaking, “The wonderful thing about filmmaking is that, like most art forms, you don’t necessarily need to attend a school in order to learn the craft.” So, if you want to make a film, you can – and in the process, you’ll start to develop new skills that will help you when it comes to the next film!

You also get to choose who you work with when you go down the indie route. Sometimes, when you work with a big film studio, you get less say in who you make the film with, but as an indie, you can build a solid crew of likeminded people, from independent producers to actors you really admire,– and it’s likely that you’ll have a ball while making your film. And, as Edgar Wright notes in his BBC Maestro course:  “You never know where your early collaborators will end up. So, take advantage of other young and motivated individuals around you and find projects you want to make with them.”

Are there any limitations when it comes to making indie films?

Of course, it’s to be expected that there are also some downsides to independent filmmaking.

It can be challenging for new filmmakers to get funding to turn their dreams into reality. When they’re not funded by big film studios, filmmakers must look elsewhere for money and many filmmakers turn to crowdsourcing, film funds or private funding as a means of getting their film made. Great films can be made on a shoestring, though, as in the case of Edgar Wright’s feature-length directorial debut, A Fistful of Fingers, which was made with a budget of around $15,000. As Edgar says in his Filmmaking course: “And while I wouldn’t call A Fistful of Fingers a must-see film, it was a very essential part of my development as a filmmaker and it led to my first TV directing gigs which would, in turn, lead to me writing and directing Shaun of the Dead.”

Some low-budget indie movies do go on to become big box office hits, though – like The Blair Witch Project, which was made in 8 days with a budget of $60,000. It went on to make over $246 million worldwide. So, don’t let a lack of budget dissuade you from making an independent film – you’ll learn a lot along the way, and you may still have a commercial or critical hit on your hands.

Another problem indie filmmakers face is how to get their film out there – but there are ways to market your movie that don’t involve the backing of a big studio.  From good old-fashioned networking to building an online presence that will get you noticed organically, it can be harder for your film to get noticed when you’re an independent filmmaker – but it’s not impossible.

Where to start if you want to become an indie filmmaker

So, if you want to give it a go yourself, where do you start when it comes to independent film production? Firstly, as Edgar Wright notes, you need to be prepared for the work it’ll entail to create your film. He says: “You need to put a lot of work into it and just because you might be a talented filmmaker doesn’t mean that making it into the business will be easy by any stretch of the imagination. But you’re never going to be able to achieve your dreams if you just sit around watching the types of films you want to make and waiting for somebody to hand you an opportunity on a plate.”

That means you should start writing and filming your own projects, getting to grips with the craft of filmmaking – and have fun while you’re doing it! There’s no linear process when it comes to making a movie, and no two film production processes will ever be the same, but here’s a very rough guide to making an indie movie:

Learn more about film and TV